Save Money with a High-production Mindset

Nowhere else is the concept of cost-efficiency more intensely analyzed than in the cut-throat world of manufacturing, and for good reason. Each action, whether improvement or misstep in design or production, is magnified every time you produce a part, so the effect on the bottom line can add up quickly.

It also can be argued that no one has a more hands-on influence on this bottom line than the people responsible for producing the part. It’s for this reason that if you hold up production, honest mistake or not, you can count on those who watch the bottom line breathing down your neck sooner or later.

When put like that, you can begin to imagine the enormous amount of pressure that is placed on machinists and fabricators. But hey, the job description never said it wasn’t going to be stressful! And even when everything’s going right, there’s the daily struggle of constantly trying to find ways to improve current processes.

If you’ve ever wondered why shop owners have an unhealthy obsession with lean manufacturing, it’s because there are essentially two ways to increase profitability: increase revenue or decrease expenses.

Since the product design and target profit margin are basically set in stone at an established company, the owner has no choice but to focus on improving outside sales or reducing unnecessary internal expenditure. There is usually more room for improvement in the latter, especially when new projects constantly flood in and the optimal production process has yet to be determined.

The classic method to reduce expenses is to purchase less expensive equipment; the theory being that a lot of these products are comparable and that price differences are based on inflated performance claims, brand loyalty and other such things. Namely, that the better product doesn’t provide enough of an advantage to justify the much higher price. This theory is not always true.

Tooling as an investment

Buying tooling is a form of investing your money. A prudent investor doesn’t think about how much their money is worth today or tomorrow; rather he wonders what it will be worth 10, 20 or 30 years from now. In the same way, a wise machinist will not pay too much attention to the initial price of the tool, despite how difficult it may be. Instead, he wonders how much life he will get out of the tool for the investment.

A tool will have its initial, or capital cost (which is the price that turns off so many buyers), but also lifetime or operational cost. The irony of it all is that higher-quality tooling that costs a little bit more upfront tends to save the buyer money in the long run.

A lot of you might be saying “I know that already,” but every day we still see purchasers/owners making decisions based on a short-term production mindset, thinking that they’re saving money. That’s because the human brain is wired to comprehend short-term problems better than long-term problems. In an environment where you encounter both small and large production jobs, you must condition your brain to work differently depending on the job.

For instance, let’s say that you’re in need of some new drills for a job that requires 1,000 holes. Drill A has a cost of $20 while Drill B has a cost of $125. You may think that the choice is clear. Without further research, you have reason to believe that both drills will have similar performance, and if not, Drill B can’t be that much better. Naturally, you lean toward the less expensive option because it costs less in the short run.

Now let’s say, on average, that Drill A lasts for 50 holes before breaking and Drill B lasts for 700 holes. This gives us a cost per hole of 40 cents for Drill A and about 14 cents for Drill B. In other words, you spent $400 on the job if you went with Drill A and $250 with Drill B, with some tool life left over. Drill B might have initially cost 5 times as much as drill A, but in this scenario, you cut the final cost nearly in half because you bit the bullet and bought quality tooling from the get-go.

If you look at the graph below, once you surpass 300 holes, Drill B will always be the less expensive option overall, despite initially costing more than 6 times as much. If this job required 5,000 or 10,000 holes, the difference would be even more significant. Keep in mind that you also don’t have to deal with the headache of switching out tools every time you turn around or deal with scrapped parts. 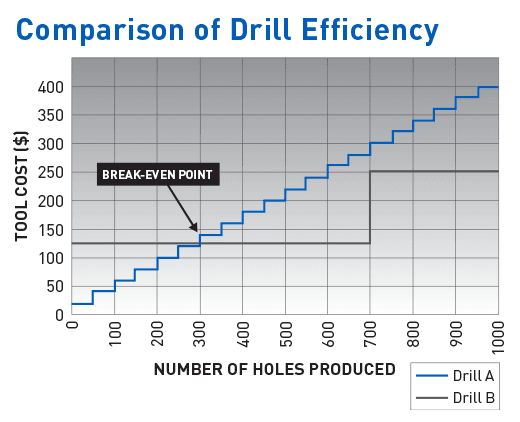 As you can see, the price tag on the drills was misleading. Depending on the quantity of your production run, the seemingly pricier option will be less expensive in the long run.

Now in the example above, if the production doesn’t exceed about 300 holes, then of course Drill A is the better option. No one is saying that a more expensive option is always more efficient; it depends entirely on your situation. But you’d be surprised at how low the break-even point is for many similar situations, and not just for drills.

We can also apply this concept to other tools, such as boring tools. Many modern boring tools are modular, meaning you can stack heads or extensions in any combination in order to adapt to any number of hole diameters and lengths. This versatility is priceless in smaller job shops, where you’re more inclined to use what’s on-hand already. However, if you need to produce, for example, 5,000 gearboxes with 3 or 4 concentric bores and chamfers, the advantage of faster cycle times start to greatly outweigh the advantage of versatility.

When deciding between multiple standard tools and a combination tool, it comes down to capital cost and operational costs (most people neglect to consider the latter). At the end of the day, you are trying to minimize the cost per cycle. A special tool or high-performance drill will certainly cost more upfront, but give it enough time, and you will eventually break even because you will recoup your investment from things like reduced runtime (power consumption, labor, etc.) and reduced maintenance. These are some of the operational costs. They can be considered hidden costs because they can be difficult to quantify sometimes.

Keep in mind that with a special combination boring tool, there are also the immeasurable advantages of having more space in the tool magazine, the option of completing hot jobs you’d otherwise turn away, and the extra time you’ll gain to work on other unrelated jobs.

If you’re experienced enough, it’s not rocket science to see which jobs would benefit from special combination tooling. Generally, the greater the number of concentric bores and/or production run, the more cost-effective a combination boring tool will be.

As you decrease the number of bores or number of parts in production, the ideal option between multiple standard tools and a special tool becomes more of a gray area. That’s when it becomes necessary to sit down and do a complete return-on-investment analysis. But again, you’d be surprised how quickly the benefits of special tooling surpass those of standard tools.

The same goes for any special tooling. A special form drill or endmill can accomplish the same thing: they reduce the number of tools needed and consequently cycle time.

The concept also applies to tool holders. Buying the least expensive tool holder you can find may save you money upfront, but soon enough the shoddy design/manufacture quality will rear its ugly head. Increased runout, greater imbalance and less gripping force will begin to hurt your pocketbook in the form of shorter tool life, scrapped parts, and in some cases, damage to the spindle. Over time you learn that you’re spending more in order to fix these problems.

In addition to being a form of investment, high-quality tooling can also be considered a form of insurance. Sure, you’re shelling out a few extra dollars for better materials and craftsmanship, but at the end of the day what you’re really paying for is peace of mind.

And why stop there? You can apply this concept to any piece of equipment, any product really. Machine tools, fixtures, forklifts, cars, toasters, paper towels, you name it. All these products, no matter how “consumable” they are, have a cost and an expected lifetime. That means you can calculate the “bang for your buck” for any of these, in other words the cost-efficiency.

We’ve all been there before: choosing the cheaper option just to get by, only to deal with the massive headache of trying to fix the problem again when it fails sooner rather than later. Shops that subsist mainly on high production can’t afford not to think in terms of long-term costs, so a cost-efficient ideology and lean manufacturing processes are essential to survival. However, smaller shops have long-run jobs also, so they must be adaptable in their approach.

It’s always in your best interest to research equipment beforehand to get an idea of the value (not the price) because it could potentially save you hundreds or thousands of dollars at the end of the day.

If you have a tried-and-true process for a job, always look for areas of improvement. Try switching out one of your tools or holders for the more expensive high-performance option and you’d be surprised at how fast it pays for itself and more by reducing scrap and upping cycle times.

Making a purchase decision based on cost alone and not doing any research may be the path of least resistance, but in many cases, you are doing a disservice to yourself (or your customer) without even knowing it.