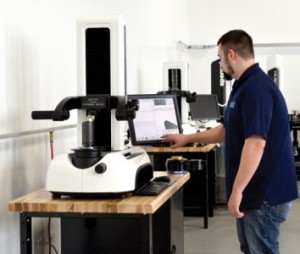 Turning machine operators and vertical milling machinists often think of themselves as a world apart, feeling a vast gulf exists between the vertical and the horizontal axes—between rotating tools and rotating parts. And in many ways, those operators are correct. But when it comes to the tooling itself, the two aren’t really that different. In fact, they’re evolving toward one another and becoming more similar by the year. Presetters are soon to join the ranks of shared traits.

Not all machine tools feature onboard presetters as standard features, but most or all popular turning machines do. This feature has created a perception in the turning arena that if it’s onboard, it’s good enough and convenient enough to use. This attitude is also common in the vertical world when the machine tools have onboard presetters. But it is important to remember that a standalone presetter frees a machine to do what it’s designed to do—make chips. A separate presetter facilitates the productivity of the large investment in that machine tool.

Shift in Tooling Approach
Historically, most turning tools have been stick tools. But with newer machines, we see different toolholders—and not just the block with a clamped stick tool. Now, polygonal, HSK, and Big Plus tapered modular, quick-change toolholding aims for more versatility for any given machine. Unlike a machining center that has virtually limitless toolchanging possibilities, depending on the size of the toolchanger itself, a lathe is limited to its two turrets. This format translates to a smaller set of tools for each operation.

In the past, extensive setup time was also required to change from one type of tool to another, and the use of live tools was limited. Now, with live tools, the lathe can stop the part and do a milling, tapping or drilling operation, as opposed to rotating the part, coming in with an insert and removing material that way. This recent shift to live tools affords an entirely new dimension of operational capabilities on turning machines. Simply put, with a quick-change setup, switching from one tool to another is faster.

But at the same time, the dimensions of the tool going into that turret must be known and preset for accuracy. And although tools can be changed over faster, the speed that the onboard machine tool presetter is used is not increased, making it more of a limiting factor. Responding to this shift and need, presetters now come with adapter capability.

Wild West of Swiss-Type Machines
While presetters now have adapters for the primary toolholding varieties, Swiss-type machines march to the beat of their own drummers. Many Swiss screw machines have a unique toolholder setup; others might have a bar. This means that Swiss machines had traditionally been off limits to presetters, simply because of the inconsistent, non-standardized toolholder design. The toolholding mechanism had been proprietary to each manufacturer’s unique design. Even though the toolholders looked similar, the minute differences from one to the next negated the usefulness of a separate, standalone presetter.

As of late, though, Swiss screw machines are making the same transition to a quick-change style toolholder that lathes and turning machines have been making. Presetter manufacturers such as Speroni, available in the United States via Big Kaiser Precision Tooling Inc., Hoffman Estates, Ill., have realized that this shift affords them an opportunity to help Swiss-type machine operators in the same way that they’ve already started to help turning machine operators keep chips flying. Speroni has worked directly with the Swiss screw machine builders, developing its technology to match their technology.

Speroni/Big Kaiser systematically approached screw machine manufacturers to discuss the benefits of presetters to end users. With manufacturers’ blessing and cooperation, Speroni then developed adapters that go into the presetters, aimed at assisting in tooling setup, and ultimately increasing productivity. These Swiss-type machines will still come standard with the ability to do the presetting/setup within the machines; Speroni is simply adding an option to take that step off line.

Three Levels of Offset Input
With a presetter measuring the tools for turning machines, operators still must factor in offset information input time. CNC controls are similar, whether turning or vertical milling and drilling, so the presetter process is similar for both. At the most basic level, presetters will print labels containing dimensions, offsets, and so on, and an operator must then manually type the printed info into the tool offset table in the control. While this method works well for one-off jobs, single tool changes, or infrequent/low volume runs, Speroni has built in new technologies to further streamline the process and reduce both human error and manual labor.

In the case of a complete setup, or setup of a complete turret changing out every tool on the machine (usually occurring when an operator is changing from one component to another), post processing is a leap forward in error-proofing. In this system, the presetter creates a file containing offset information and sends the file out to the network, where it can be pushed to the control via DNC software. Also, the newer turning machines have the ability to find a component program file and automatically upload it. The program inputs similarly to how a component program would be input into the machine. The messaging from the presetter would only be an augmentation for the offset. This post-processing technology completely removes human error—often referred to as “fat finger syndrome”—and helps to minimize the scrap it causes.

The most reliable inputting method is radio frequency identification (RFID) as a means of uploading offset information into the control. A new presetter, once it has measured the offsets at the end of the cycle, will write all of the dimensions to a tag that is inside the toolholder. In this system, the toolholder itself then carries all of its dimensions and offset details with it. Once it goes into the machine, the control is able to read the tag, and then updates its tool offset table from that tag.

These three levels of input security do have a cost difference. Basic printing and manual entry is the least expensive option—the label printer being the single expense—but operators are subject to fat finger errors. The post processor is reliable and removes transcription error and fat finger error, but the file and tool remain two separate things. If an operator offsets the tools for one machine and loads the post processor file into the machine, but then places the tool into a different machine or into the wrong turret pocket (which often happens), the entire processes is flawed. To avoid these mistakes, RFID is increasingly used, and it’s error-proof. The tool is measured, the tool goes onto the machine, and then the machine (whichever machine, in whichever turret pocket) reads the tool. This method is the most reliable. 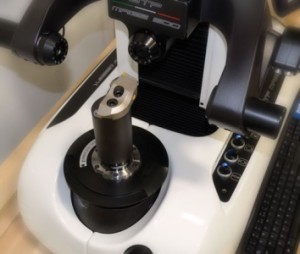 Solutions for Turning’s Unique Challenges
Although their use of quick-change tooling is increasingly similar, machining centers and turning machines still have their differences. Presetters moving into the turning market have had to make significant changes, adaptations and additions to compensate.

Unlike on a machining center, a lathe’s rotating part and a stationary tool allows an operator to change the orientation of the cutting edge, depending on the cut being made. Plus, this orientation may not be symmetrical, as rotating tools require. To account for this, new presetters, such as the Speroni Futura and the Speroni Magis, are doubling down on functionality. New models have added four-position spindle locks, each at a 90-degree angle, which hadn’t been necessary on rotating tools.

Another option Speroni has added specifically for the turning market is a second camera. Turning tools aren’t always on centerline as rotating tools must be, so depending on the tool, an operator needs to know how far off of centerline a tool is. The second camera looks in at the cutting edge so operators can calculate the distance the cutting edge is off center. This is another critical dimension for programmers and operators alike.

Speroni and Big Kaiser’s primary focus in the turning and Swiss screw machine market is to error-proof and increase productivity. With that in mind, the turning-focused Magis and Futura presetters can act as the operator’s eyes and give both process security and insight into rake angle and nose radius. Tools are getting more complex, and new and different materials are entering the scene. The insert must be good out of the box. Presetting is, therefore, a matter of inbound quality control. Many manufacturers already consider these factors for barstock in a metallurgy audit. Now, even more pre-process quality control is available to the turning market via a new age of presetters.