Boring tools with a digital readout aren’t the standard in U.S. shops, but their use is growing.

Think about the number of digital equipment interfaces and interactions an operator has when machining.

Machine operators use keypads and computers to run tooling programs and measure parts with digital gages and coordinate measuring machines. By definition, CAD/CAM work is accomplished digitally. Machine tool controls have digital displays. On most tool presetters—even simple ones without a vision system—the readout is digital. Bore gages are digital, whether it’s an air gage or a three-point-contact gage. There are still a few old-timers who trot out ID micrometers once in awhile, but most measurement devices are digital for speed and accuracy.

Kaiser’s new Series 112 EWD 2-54 precision-finish boring head has a built-in digital display that allows operators to make adjustments on the fly. The digital unit uses accessories from the Kaiser EWN 2-50XL Series, accommodates through-coolant and can be operated at a maximum spindle speed of 20,000 rpm.

Digital has become the common language in metalworking and machining. The primary advantage of digital is its precision. There’s nothing subjective about a numerical reading. And this advantage has made its way to the boring head, where it is has been established technology for 10 years but is still far from being universally used.

As such, digital boring heads bridge the technology gap between digital measuring technology and existing tooling systems by adding a digital readout (DRO) to clearly show incremental diameter changes. So when an operator measures a bore and finds it undersized by 0.0004 " on the DRO of his measurement device, he simply has to zero the boring headreadout and adjust the diameter until the digital display reads “+0.0004 ".”

For the tightest-tolerance operations, one comparative drawback with analog systems is the frequency of human error—especially when the dial divisions are 0.0005 " on diameter. In addition, vernier markings complicate the adjustment procedure when it is necessary to split the divisions even finer. At that point, operators aren’t just moving from one division to another; they are forced to keep track of two different sets of markings to make fine adjustments, which can be confusing.

Of course, an operator could misread the number of zeros on a digital boring head, turning 0.0005 " into 0.005 ". But that error happens less frequently than an error caused when adjusting to a dial marking on a head that doesn’t have a DRO.

Still Kicking
Analog readout technology isn’t dead because it’s still highly effective for the majority of low- to medium-level tolerance operations. Few shops have yet to make the switch to digital boring across the board, and it will be a long time before more do so on a regular basis. Digital boring heads cost 60 to 80 percent more than their analog counterparts.

That said, as old boring heads need replacement and more operators become accustomed to the advantages of digital boring adjustments, there eventually will be a turning point in some operations where it makes sense to go all digital. This change won’t happen just because it’s the direction of the industry.

Digital Advantages
Digital boring heads are, quite simply, easier to work with than analog heads. For tight tolerances, the ability to display actual cutting edge movement means operators don’t have to constantly check for accuracy for fear of backlash. Cartridge screw adjustment as a function of turning a dial screw or ring until a specific mark lines up is very accurate and still viable. But if boring heads aren’t properly maintained, operators can experience backlash. 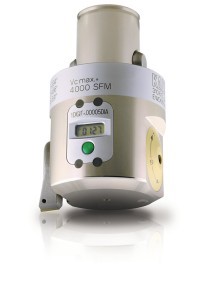 Backlash is slop between the adjustment input and the tool carrier output. An operator rotating an adjustment ring or turning a dial on a worn or abused analog boring head may not notice any diameter change of the cutting edge on a tool presetter—even after moving several clicks or dial marks.

While the presetter is essential for initial setup, boring often requires a test-cut-and-adjustment procedure, which is most accurately completed while the tool is in the spindle. Heads with backlash make operators wary of adjusting tools in the machine spindle, which costs time and possibly accuracy if the boring bar does not sit in the presetter spindle exactly the same way as it does in the machine tool.

A digital system isn’t concerned with the input mechanism itself; rather, it measures the tool carrier travel directly, so an operator always has access to the true digital diameter readout. It doesn’t measure where the scale ring or dial says the cartridge should be—the real distance is on display.

Don’t Sacrifice Performance
If a shop is considering moving from analog to digital boring tools, the best conversions are those that can be accomplished without having to replace any accessories—simple one-for-one boring head trade-offs. Still, ask questions to ensure this is the case with your shop. Users can defeat the purpose of digital ease of use if the head isn’t a 1:1 replacement and additional programming or tinkering is necessary when converting to digital.

For instance, Kaiser’s 112 EWD, 310 EWD and 318 EWD digital boring heads are otherwise identical to their analog predecessors. They have the same boring ranges, cutting parameters and through-coolant capabilities, so an operator can swap an analog for a digital model with little or no reprogramming. All three series use the same accessories, such as boring bars and insert holders, as their nondigital counterparts.

Digital has become the true common language in metalworking and machining—a fact that will, sooner or later, influence boring tool selection, according to BIG Kaiser.

Digital boring gives operators more confidence in their adjustments. It’s faster, too. Trying to make an adjustment of 0.004 " or 0.005 " on diameter when counting little dial divisions on a head, compared to seeing that value on a digital display, is a lot simpler and easier.

The return on investment from digital boring comes not only from time savings when making adjustments on the spindle, but also in the accuracy that prevents poor adjustments and resulting scrap. Shops producing high-end, tight-tolerance parts have expressed the most interest so far in digital boring.

Despite the obvious advantages of digital, the technology isn’t yet for everyone. But as manufacturing and technology continue to become more and more entrenched in the digital realm, there will be a tipping point after which digital boring is the norm. Some shops will just be ahead of the curve.