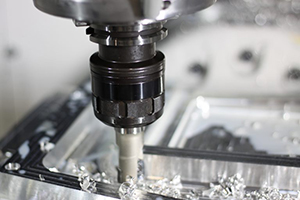 On race day, everybody sees the race on TV, but behind the scenes there’s a competition going on between shops where time is everything, according to Matt Gimbel, Team Penske’s production manager. Fifteen little things could add up to the half a second we need on the track to hit our goal. Whoever can implement changes the fastest will typically have the advantage, but precision tooling can make the difference between winning and losing.

“We’re in a low-volume, high-mix environment with short lead times, so it may be hard to compare us to a typical shop—the roughly 50,000 parts we produce a year may be made up of just 2000 part numbers,” Gimbel continued. “But the pressure to continually adapt while maintaining high quality is the same as what every other metalworking operation faces.”

A racing shop’s work is unpredictable and lead times are short. Rules change from week to week—often significantly—requiring different parts be added, removed, or modified. Each week’s race track also requires similar adjustments, not to mention the real-time performance feedback from the track during race weekend. In post-race debriefs, engineering and management devise plans to make race cars track-ready by the next weekend. Decisions must take into account performance factors like weight, balance, stiffness, and aerodynamics of the race car.

“Most teams get excited when they have one win,” said James O’Toole, machine shop manager. “Last year between all three series, we achieved over 30 wins. Engineering can come up with a solution that will gain us speed on a particular weekend and we could be getting parts to the vehicle within a day or less. There’s seldom time to sit down and thoroughly process plan each job. Meeting time to market in the racing industry can be just six to eight hours,” O’Toole said. 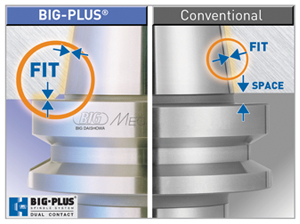 The Team Penske machine shop constantly optimizes processes and equipment. In recent months, it has adopted tooling improvements based on its decision to expand usage of the BIG-Plus spindle interface and toolholders from BIG Kaiser Precision Tooling Inc. (Hoffman Estates, IL). In the BIG Plus interface, both face and taper contact occurs through elastic deformation of the machine spindle. As the retention system is activated, the holder taper forces the spindle open until face contact is achieved.

Toole reported that with additional BIG-Plus toolholders, gage lengths were more repeatable; there was added rigidity; vibration was dampened and torsional force was decreased to minimize deflection at the cutting edge. This was especially important when using extended length holders with gage lengths over 10″ (254 mm) in some five-axis applications.

Across the Board Repeatability

“When our machinists kept requesting additional BIG-Plus toolholders—because their performance was superior to a majority of our current inventory—that was the proof for me,” said O’Toole.

After a meeting at IMTS in 2016, Team Penske and BIG Kaiser looked for ways to better achieve first-part precision. Minimal runout or stability issues occasionally resulted in resets and performs delicate work milling aluminum, titanium and steel. For the best results in the shortest time, they utilize high-feed insert cutters. Vibration has been the challenge in these scenarios, especially in some high-speed aluminum mills. Team Penske has sometimes seen so much vibration that it loosened the screws on the insert and caused damage.oversized or tapered bores. O’Toole knew these same consistency issues could easily escalate to catastrophic levels on some of the team’s long-reach, multi-axis work.

To combat the risk and address the existing struggles, the shop began using BIG-Plus Mega ER collet holders. The ball-bearing raceway and cylindrical outside diameter result in low torsion force on the collet and enhanced gripping by reducing frictional resistance between the collet and nut.

While the clamping nut made reaming, drilling, and milling operations more consistent, regardless of operator and number of tool changes, performance in one of the shop’s more demanding applications particularly stood out—reaming of ±0.0005″ (0.013-mm) holes performed on a Mazak VC500A-5X with gage lengths extending past 10″ (254 mm). “We can now ream and interpolate without heavy deflection or runout, less than 0.0002″ [0.005 mm] in fact,” O’Toole said. “It speaks to the accuracy of the Mega ER, BIG-Plus holders because it’s the starting point—working all the way down to the relationships between the collet and toolholder, the nut and the collet. It’s really impressive when you look at how many interfaces there are in the buildup to achieve hole tolerances ±0.0005″ [0.013 mm].”

“One of the biggest things you can look for in tooling is versatility,” O’Toole continued. “With all the different holder types that BIG Kaiser offers, we can standardize our magazines to a high level, moving from one job to the next seamlessly and with reduced setup times.”

Offline tool presetting with a Speroni MAGIS 400 tool presetter has paid its biggest dividends in untended operations, an area of growing focus for the Penske shop.

To make their cars as light and aerodynamic as possible, Team Penske’s shop performs delicate work milling aluminum, titanium and steel. For the best results in the shortest time, they utilize high-feed insert cutters. Vibration has been the challenge in these scenarios, especially in some high-speed aluminum mills. Team Penske has sometimes seen so much vibration that it loosened the screws on the insert and caused damage.

Instead of settling for slower feed rates, BIG Kaiser engineers suggested trying the company’s Hi-Power milling chucks. They explained that the holders are tailored for this type of work via several characteristics—fine slots, needle bearings, a lack of threads, and balanced clamping around the entirety of the tool instead of a single setscrew.

“We have a more stable tool in the spindle,” O’Toole explained. “That’s the defined role for the chucks now. We won’t replace all of our BIG-Plus sidelock end mill holders with them, as those are well-suited for general purpose milling, but when we work in these demanding applications, we definitely see the value in the BIG-Plus Hi-Power milling chuck.” 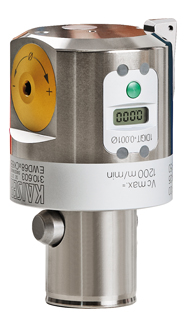 A job in summer of 2017 involved a run of 80 3″ (76-mm) diameter holes in Rc 32 steel with tolerances of ±0.0003″ (0.008 mm) while maintaining roundness of 0.0003″ (0.008 mm) total. The BIG Kaiser boring heads Team Penske had long been using performed well, but at such precision, finishing adjustments were still needed. To expedite the process, Team Penske adopted BIG Kaiser’s digital boring heads.

Digital readouts that displayed real-time diameter adjustments down to 50 millionths and confirmed clamping provided an efficiency boost to the bore finishing. With adjustments validated immediately, the need for test cuts was eliminated, making for an 80% faster adjustment process.

“When we did need to make adjustments, it was easy,” O’Toole said. “We could leave the boring head in the spindle and make finite adjustments, all the way down to a half tenth, and carry on our way. Whatever we saw on the readout was what we saw in the resulting part. We’ve added a second digital head since and, just like the holders, our machinists want more.”